Revelation 18 and the fate of America 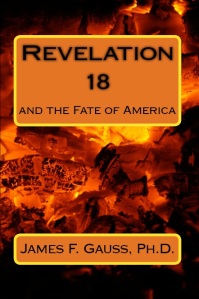 Available from Amazon.com; CreateSpace.com, your local bookstore or other online booksellers. Also available as an Amazon Kindle e-book.

From the Author. This is without a doubt the most important book I have ever written. While it is a book I did not plan to write or want to write, it appears that God desired otherwise. In the spring of 2009, my wife and I were independently praying, asking God what we should do with the rest of our lives and where we should live. One day my wife came to me and said that she had a sense that we were going to be moving. Since she never wanted to move before; not wanting to leave our home and family, I knew God was up to something, because I also had the same feeling but did not want to mention it to her. Now that it was out in the open, we jointly prayed in earnest for God’s direction. Initially we thought we might be moving to be nearer to one of our children in the U.S., but God had other plans. In any case, we started to fix up our home and get it ready for sale. Not long after that we received a phone call from someone we had not heard from in over 30 years. She said that she felt God wanted us to move to her country. Since we never had passports and the only foreign country we had visited in our lives was Canada, we politely declined. But we prayed about it anyway. One night before going to bed, I was impressed to read Revelation 18. I had not read anything in Revelation for years (it not being my favorite book in the Bible) and had no idea what Revelation 18 was about. But as soon as I started reading it, it was as if the Spirit of God grabbed me and said this is the United States. Through additional confirmations, it was clear to us that God was calling us to move abroad. For over two years I wrestled with the image of Revelation 18 and how America fit into this prophecy of the Bible. Early in 2013, God seemed to lay it all out in front of me and I could resist it no longer. The result is an exhaustive, in depth work that is a stark warning to America, particularly to the Christian church in America, about the future of the United States if it does not turn back to God. I cannot say that I enjoyed writing the book, but rather, that I was compelled to write in obedience to God’s calling.

About the Book. Will America survive? That is the question that is becoming more frequent in the minds and on the tongues of Americans at home and abroad and also non-American observers worldwide. Can the United States of America survive the unyielding assaults on its constitution, morals, economy, justice system and religious foundation—not only from without, but also from within its own borders? Does America or the concept of it occur in the Bible? Does any prophecy in the Bible speak of America? In Revelation 18 and the Fate of America, Dr. James F. Gauss explores in detail this particular chapter of the Bible in light of past and current events and how America is on course to fulfill this end times prophecy. This book is a reality check and warning to the church in America and U.S. citizens about the self-destructive course America is on and what to do about it. A “must read” for every Christian and person concerned about the future of the United States of America.

Chapter 3: The Babylon of Revelation 18

Chapter 4: “Babylon the Great has Fallen”

Chapter 5: Place of Demons and Perversion

Chapter 6: Nations Have Drunk of Her Immorality

Chapter 7: World Leaders are in Collusion with Her

Chapter 8: Businessmen are Enriched by Her Luxuries

Chapter 9: Separate Yourself from Her

Chapter 10: Her Sins are Piled High

Chapter 11: Double Payback for Her Sins

Chapter 12: Torment & Mourning for Her Pride

Chapter 13: God’s Judgment in One Hour

Chapter 14: The Earth Will Lament Her Demise

Chapter 16: Her Riches Will Disappear

Chapter 19: Remnants of its Christian Foundation

Chapter 20: Can Judgment be Averted?

Postscript: A Prayer for Revolution

More Books by the Author

First of all, Dr. Gauss has done a marvelous job of research, I would not know where to begin with it. I have read and have several books on the subject, but his is the most comprehensive and detailed I have read.  I have to say well done. . . . I think every news analyzer should read his book.  I believe God is after every one to realize their destitute condition and begin to repent, turn from their unbelief, and immoral thoughts. This should be in every American history class in America. May God Bless the spread of the truth. Islam vs Christianity was a excellent read as well. Dr. Ray R.

I agree with you and note that I am not a U:S: citizen. Sorry to say that most of americans don’t know your history or what is going on in your own country. It is very sad to see that this degradation in going on in many countries including mine: Ecuador. I have almost finished reading Revelation 18 and I must say it is a great book. Please if somebody is reading this, forget about television, read that book and get involved in fighting what is wrong.  Carlos Molina

I learned a lot from this book as the biblical passages cited are often framed within the context of how our Founding Fathers approached their task of creating America within the context of its religious mission. They viewed their struggle as undertaken under the authority of God, and we as a country have slid from this purpose so far! In fact, I had no clue that our country was so completely immersed within the word and seeking alignment and mercy from the almighty. Didn’t learn that in government or history classes! By contrasting the Founder’s vision of America and the America of today, the book provides a lot of insight on our country’s current condition (and malaise) and possibly how to rectify the situation.   Brett Hudson

Revelation 18 draws a parallel between the fall of ancient Babylon described in the chapter cited and the current fall of the United States of America.

I read this book reluctantly because I have never really been able to understand the book of Revelation in either the King James Version or any of the newer ones. It has always seemed to me to have been written in an ancient code legible only to ancient peoples who lived around the time it was written.

Dr. James F. Gauss has taken this one chapter of Revelation and made it clear by contrasting its content with what has been and is going on in the USA today.

“As America’s wealth and power grew, so did its worldwide influence. However, what it gained in influence it relinquished to pride, moral collapse and perversion. The once great nation that was founded on Christ-centered ideals and life style slipped ever so slowly at first…then swiftly into hedonism and godlessness.”

The similarities pointed out verse-by-verse between the fall of Babylon and the ongoing moral collapses of the USA are indeed startling and tragic.

As John Darby’s commentary describes it: “(The powerful) mourn over her; so do those that have sought profit and ease and commerce in the earth. The royal and commercial system is shattered to pieces by the upset of the system. What characterises her, that for which she is judged, is idolatry, corruption, worldliness, and persecution. She is judged destroyed, and the prosperity of the worldly is smitten by her fall…”

Dr. Gauss has shown how this chapter describes, not only the fall of Babylon, but also the fall of any country that loses its moral compass. This has been true of many countries over the centuries and is most clearly true today as regards the United States of America.  Amazon customer 5-star rating, July 7, 2015.

Author, journalist, speaker with 40 years of experience and publication. Author of "A Champion's Heart", "We the People, Volume I: Laying the Foundation", "We the People, Volume II: Birth of a Nation" and "Islam & Christianity: A Revealing Contrast."
View all posts by James Gauss →
This entry was posted in America in Prophecy, Babylon, Babylon of Revelation, Early American History, End Times, Founding Fathers, History, Last Days, Revelation 18, U.S. Constitution and tagged Babylon of Revelation 18, spiritual restoration. Bookmark the permalink.

1 Response to Revelation 18 and the fate of America